Wilhelmina Harvey was the first female commissioner of Monroe County and the first  woman  to be elected Mayor Emeritus.  She was a philanthropist and a "grand dame of Keys politics." In l982 when Key West  citizens of Key West formed the Conch Republic, a satirical micronation, in response to a Border Patrol checkpoint that disrupted travel and tourist activity. Harvey became Admiral and First Sea Lord of the Conch Republic's navy, whose actions included attacking a Coast Guard cutter with loaves of stale Cuban bread.[8][4] The Conch Republic became a Key West mainstay as a tourist attraction and a humorous method for the city to negotiate with state and federal governments. During the 1995 "invasion", she stopped and accepted surrender from Army Reserve troops.[9] She often served as the Republic's ambassador and met several presidents and foreign leaders in that capacity.[3] In 1991, she hosted Queen Elizabeth at Dry Tortugas National Park, acting as both Monroe County mayor and Conch Republic ambassador.[3][2]

Rick Worth, a local artist immortalized her on a mural on the side wall of Bobby's Monkey Bar as she crossed the 7 mile bridge with a diverse crew, 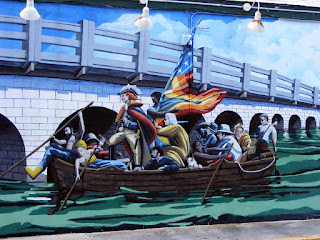 which served as the model for One Human Family––Unity in Diversity
Posted by Kenneth D. Michaels at 5:19 PM