ONLY IN KEY WEST

The Southernmost Point is not actually the southernmost point.  Like so many things in Key West, things aren't what they seem.

The southernmost point is actually on an island west of Key West but no one is allowed to go there. Others say it is located in Truman Annex, a different area of Key West.

Regardless, many people go there and wait in a line to get a picture. It is colorful and is an interesting shape.

I do think Nick and Norm may have met with an important informant there. For those of you unfamiliar with Nick and Norm, they are the likable odd couple detectives who star in Only in Key West. 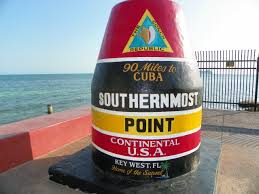