The bat tower, also know as the Perky Bat Tower, was built in l929 on Sugarloaf Key by Clyde Richter Perky.  It was supposed to control the mosquito problem in the lower keys.  The plan was to fill the tower with bats, who would eat the mosquitoes.  Unfortunately, once they were put in the tower, the bats flew away.  Guess it isn't the Perky Bat Tower anymore. It would be a great place to hide a body if you were writing a mystery though. 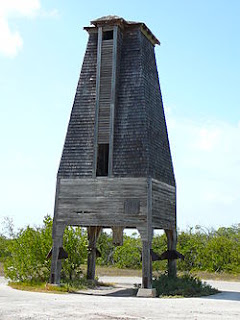