Today, Saturday, February 24th from 10-3, I will be at the Oldest House in Key West. Each year writers and the public assemble to display their books and engage in conversation regarding their books. Authors sell their books to those interested. Sometimes, there are refreshments, sometimes not. But a good time is had by all. If you out and about, come join us in a traditionally fun event.
Thanks.
Posted by Kenneth D. Michaels at 4:28 AM No comments:


We have a wonderful event here in Key West entitled "Artisans Market." I'm sure it's like most outdoor markets all over the world where people bring their wares and sell them.  Although there
are painters, jewelry makers, and food booths (I was told the ribs were the best. Half a slab for $14 and a whole for $24. I may be off in the numbers but one thing I do know for sure is that the ribs are the best and if I wanted some, I had to hurry because they sell out quickly.)  I and three others from the Key West Writers Guild come to sell our books. The event lasts four hours, 10-12 and 12-2.  I had the early shift and was glad I did since just as I was leaving, it began to rain. Buyers do not come unprepared. They pulled their ponchos out of their pockets and were dressed for the occasion, undaunted by Key West's somewhat surprising weather at this time of year. Two of the four writers, Wesley Sizemore and Jane Newhagen, stayed on for the afternoon, being joined by Bill Bahlke and Joanna Brady.  I was pleased with the event. A lot of friends dropped by, some to say hi, others to buy my book. I do believe I really enjoy the reunions even more than the selling of my books, The Gay Detective and Only in Key West, both of which are doing well, thank you. One of the people I hugged was Jesus whom I told I was coming by the office this coming Friday. He retorted with,
"Thanks for the warning," and gave me a sly smile. Come to the next one, readers. I'll keep you posted. I do know I'll be at the Key West Book Fair this coming Saturday, Feb. 24th from 10-2, which is held in the back yard of the Oldest House in Key West. It's a fun event. Hope to see you there.
Posted by Kenneth D. Michaels at 6:46 PM No comments:


Yesterday was Paczki Day.  A day I remember celebrating every year.  Our family would send one of us to wait in line and you had to be there early in order to get in and out, and, of course to choose the ones you really liked.  I just read each is about 425 calories, but no one counts because Lent is one day away, a long haul until Easter.  Don't they look good?   Yummy up. 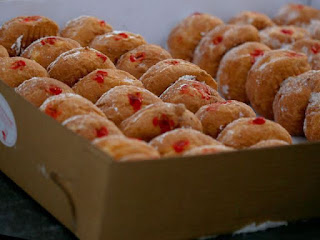 Posted by Kenneth D. Michaels at 5:03 PM No comments: